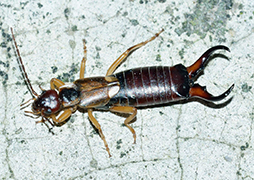 See All Earwig Photos and Videos
Have an Earwig Problem?
Call (800) 468-7859
Get an Estimate
Start Service

How to Identify Earwigs

Out of the many different insect orders, earwigs are considered to be part of the smaller orders. Most people recognize earwigs by their forceps pincers or cerci, which are connected to the earwig's abdomen. However, not all earwigs have the iconic pincers, and although they have wings, earwigs rarely fly.

The earwig is considered to be a ground insect, but, when appropriate, it can easily fly. The majority of earwigs live beneath leaves and areas that contain mulch. It's important for homeowners to know that earwigs don't use their pincers to attack humans. However, if earwigs are disturbed, there is a chance that they'll latch onto skin, which can produce a mild pinch. The forceps or pincers on a male earwig are usually larger than a female's pincers.

The term earwig is actually the result of an old superstition, which says that an earwig will crawl inside a person's ear and begin to feed. Luckily, this isn’t true and earwigs don’t seek out people’s ears. all earwigs are omnivorous. However, some species of earwigs are skilled predators.

Bites and Treatment
Infestation
How to Get Rid of Them
Is Your Home at Risk?
See All Earwig Photos and Videos