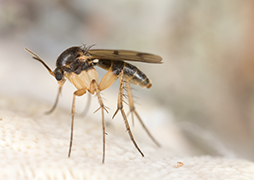 Contrary to popular belief, gnats are not immature stages of flies but are actually tiny adult flying insects in the order Diptera that also includes mosquitoes, crane flies, black flies and midges. Gnats belong to several different families, consisting of species numbering 3,000 in 150 genera or more:

Gnats versus Fruit Flies and Midges

Gnats, fruit flies and midges are often thought of as the same insect but are actually different in many ways. While most household gnats can be annoying and problematic to control, most household species don’t bite or sting like some midges and most mosquitoes. However, some biting, disease-carrying gnats cause river blindness in sub-Saharan areas. “No-see-ums,” or sandflies, fall into the midge family group of tiny flying insects. Midges and some biting gnats need blood meals to reproduce effectively and some of these biting species cause allergic reactions and transmit diseases. Male gnats sometimes form mating swarms that are known as “ghosts.” These swarming events occur usually at dusk; no-see-ums, however, swarm at dawn and at dusk.

Bites and Treatment
Infestation
How to Get Rid of Them
Is Your Home at Risk?
See All Gnat Photos and Videos